Cobra Skulls will release Bringing the War Home on January 18th. This 5 song EP is the band’s first offering on Fat and boasts cover art by world-renowned artist Martha Rosler. Cobra Skulls are currently on tour with Dead To Me and will join NOFX on their January run. Devin (singer/bassist) drops some heavy shit about the album below. Check it out.

I’m very proud of our new 5-song EP, “Bringing the War Home”. I think the new songs are some of our best yet. They aren’t necessarily an indicator of what our next full-length will sound like as I wrote these songs year ago, but never got the chance to bring them to the band until a couple weeks before we recorded them in August. I think the most notable difference this recording is Luke’s drumming. We love our old drummer Chad who was amazing, but Luke’s got a different style all his own. He’s a ripper and we’re lucky to have him.
The title of the EP comes from an old protest slogan of the Vietnam War era and I think the phrase is just as meaningful today during our ongoing, illegal war in Iraq. It’s an obvious play off of “Bring the Troops Home”, but it has a few more meanings as well as the implication to bring our troops home. To some it may sound offensive, but in the instances of the Vietnam and Iraq wars it implies that if there were no troops there would be no war. It also refers to the fact that the war is taking our tax dollars that we could spend on building and maintaining health care, schools and a crumbling infrastructure. (It seems like barely any people, and few economists point to the fact that we are in an economical crisis mainly because of war spending.) We need to bring our troops and that war money home. “Bringing the War Home” also refers to how we are culturally isolated in the U.S. and increasingly distracted with technological gadgets and we have a war within our borders that we have exported over seas. We don’t witness the misfortunate repercussions of our war except for when our injured troops come home, battered, dismembered and many with PTSD.
I am extremely excited that world-renowned artist, Martha Rosler, allowed us to use her art for the EP. She has been highly influential in the art world for decades and received many awards for her art that has often focused on and been critical of war, media, housing, homelessness, transportation, and the female experience. Rosler’s pieces which we used for the EP are also critical of the way modern Americans go about our consumer-driven, materialistic and pampered lives. We are distracted and desensitized by vapid technological wonders that separate us from nature and each other while great suffering and real horror exist on this planet by which we are all connected. That’s a problem, a conflict and a war that we can’t keep ignoring and the only way we can change it is by first acknowledging it by brining it home where we are forced to deal with it. 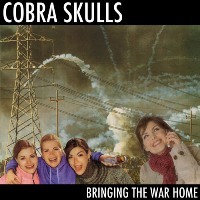