After nearly 20 years of churning out nonstop hit records we figured it was high time to take on the daunting task of putting together a Fat Wreck Chords box set. Why? Well, besides the fact that we love a challenge, we realized that with over 280 releases and a roster that reads like a hall of fame list, it was probably long overdue. So, over the past few months we here at Fat engaged in many long discussions, heated debates, and, ultimately, an office mud wrestling match (which Floyd won, of course), in order to determine a track list that we thought was worthy of representing Fat. And we don’t mind saying that we did a damn good job. The box set is called Wrecktrospective (get it?) and it contains 3 discs. The first disc is a greatest hits of Fat, featuring 33 bands. The second disc features 28 previously unreleased demos. Finally, the third disc is the extremely limited Fat Club 7" series in it’s entirety, previously unavailable on cd. Just to sweeten the pot, there is a fold out poster included and a bevy of entertaining stories provided by the bands. All in all, you’d be crazy not to pick this thing up.

And if 88 songs aren’t enough for you, we will have Short Music For Short People on color vinyl available soon. 101 30 second songs never before on color vinyl. 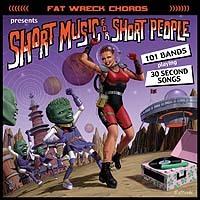