New Dead To Me and Swingin' Utters out today!

Dead To Me, Little Brother

This new five song EP from Dead To Me fills the tall order of surpassing the lofty expectations set by the band’s critically acclaimed first full length Cuban Ballerina. Little Brother showcases unforgettable melodies earnestly belted out by the dueling lead vocals of Jack and Chicken along with a sophisticated stylistic diversity that displays the band’s maturation and songwriting prowess. Bold, vivid album art designed by the band completes this pretty package. 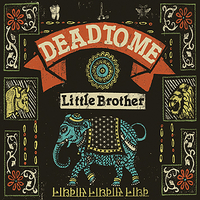 San Francisco’s biggest and best punk band, the Swingin’ Utters, have returned to set the scene with their latest release, Hatest Grits: B-Sides And Bullshit. Where other bands have made a mockery of street punk with their corny gimmicks and posturing, the Utters deliver music brimming with the passion and desperation the genre is known for. Hatest Grits is a collection of rare 7" singles, b-sides, album outtakes, compilation songs and covers, including nine previously unreleased tracks (and a few surprises). Insert includes liner notes on each song from band members past & present and tons of old photos.

See them live in Texas: