An MP3 of The Flatliners song âCarry The Bannerâ is available for download on our site. The track is one of 12 songs featured on the new record, Cavalcade, in stores and online April 13th. Click here to pre-order Cavalcade and here to visit the band’s MySpace page.

Check out The Flatliners tour dates beginning on March 31st with The Cobra Skulls and Broadway Calls by going here!

Take a peek below at what Chris from The Flatliners had to say about the track:

Back in the Great Depression, responsible, successful men became vagrants. Everyone was cast out like an economic-turned-social eclipse. When these people without homes or any sentiments of hope couldn’t find a safe place to sleep at night during these trivial times, their only option left was to “carry the banner.” This meant they’d risk sleeping on the streets while trying to avoid being locked up for vagrant charges or worse, being killed.

We’re lucky enough to live in a time where the world is a bit more stable than it was back then, but people need to remember we’re not too far off from where we were back then. What we do with our lives – play music and travel the world – we basically live like homeless buskers for 8 months out of the year. Our new album Cavalcade was partly inspired by reading about those dire times during the Great Depression and realizing just how many parallels there are in these times we live in today. And our new song “Carry The Banner” fully embodies the theme of positivity in uncertain times. Negativity is overrated. 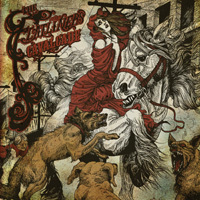