NOFX: Backstage Passport DVD and an old Rancid 7" out on Fat!

The NOFX dudes and their crew did a giant world tour in 2006, and they brought a camera man. They played shows way out in the sticks, places where you couldn’t buy a NOFX record if your life depended on it. The resulting video footage was exciting, chaotic, and hilarious—sorta like Spinal Tap meets the Decline of Western Civilization meets Pineapple Express…but it’s all real!!

Add some subtitles, a few musical montages, and voila! An 8-part docu-series was born! NOFX: Backstage Passport first aired in April 2008 on Fuse TV, and back by popular demand, it will now be released in its entirety right here on Fat Wreck Chords.

On March 17th NOFX: Backstage Passport will be available on DVD! This 2-disc set will include all 8 original episodes, plus OVER 2 HOURS of uncensored, never-before-seen bonus footage! You thought the absinthe-chugging Kent on the train to Russia scene was funny? Well, wait til you see what happens when he’s drunk in public at the Rio airport and the Brazilian cops get involved. 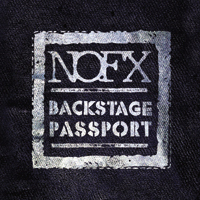 Currently, NOFX are working on their tans, learning the hula, and playing a few shows in Hawaii. Check out all their upcoming tour dates for the year including their 25th Anniversary shows, the PunkSpring Festival in Japan, and a European tour in April and May. Get your tickets now!

Oh yeah, we also have this old 7" inch we’re trying to get rid of from this unknown band called Rancid on some white shoes colored vinyl. It includes some alternate versions of songs you’ve probably never heard of like “Radio” and “Dope Sick Girl”. It’s a limited pressing so buy one here if you like collecting round white things…