We are proud to bring you Pour Habit’s first ever Fat Wreck Chords release! They are currently out on tour with NUFAN & Only Crime—check out the dates here, and get your copy of Suiticide here: 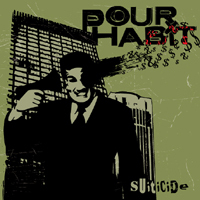 Fat Mike had this to say:

So, Pour Habit’s record comes out today. It’s pretty cool. I just got off the road with them and I gotta say, one of the best bands we’ve ever had open for us. Whether or not you buy their album, you should for sure see them live and buy them drinks. And if you give the singer a dollar, he will spin on his head for 5 seconds. True story.

Oh, and one more thing:
Just for the record I wanted to say that I wrote the song, “Creeping Out Sara” to be funny and offensive and even a bit danceable. There seemed to be no problem, until a couple of magazines printed that NOFX were dissing Tegan and Sara in the song. Totally backwards. I was dissing myself in this song. I like Tegan and Sara and Sara was a total sweetheart when we met and talked that day I sing about in the song. The next day I felt like a total creep, so I wrote a song about how lame and inappropriate some of my questions were. So yes, there is offensiveness and disrespect in the song, but it’s all directed at me, Fat Mike (Drunken Creep, opponent of Prop 8, Morman church hater, and proud writer of many offensive songs).

Now Iron Maiden on the other hand…