Smoke or Fire, The Speakeasy out November 9th!

Smoke Or Fire are set to release their third full length on Fat titled The Speakeasy on November 9th, recorded by Matt Allison at Atlas Studio. A member change welcomes Ryan Parrish (Darkest Hour) who lends his talent on drums; while this recording marks the first time Gwomper (AVAIL) was part of the writing process since he took over stewardship of bass when long time member Ken Gurley left the band. The Speakeasy is a complete album in the truest sense, lacking nothing, while offering varied, yet equally enthralling melodies and music on each of the 13 tracks. Constructed around the cornerstone of the guitar driven, heavy punk rock sound they are known for, this album evolves much further. Innovative melodies are ushered along by clever guitar work as gruff vocals give way at times to a more polished pitch. Catch Smoke or Fire on a wee east coast run and be sure not to miss them at our CMJ showcase on October 23rd! Take a peek at what Joe McMahon had to say about recording The Speakeasy below:

We were so happy to be able to record the new record with Matt Allison in Chicago. Matt is not only a great friend of ours, but really becomes the 5th member of the group when you’re in the studio with him. We were working with a pretty slim time period on this record, and everyone really showed up. Ryan Parrish killed it on drums, and made such great contributions during the writing process. It was also a lot of fun to watch Gwomper record his Bass on the record. He gets so into it, I think he moves around more while he’s recording than he does on stage. The only hitch we ran into was me losing my voice half way through recording vocals. When that happens all you can do is wait until it comes back, and you have no idea how long that’s going to be. It took 6 days before I could start singing again. When the record was finished, Jeremy and I both agreed it was the first time we had left the studio with everything coming out exactly the way we wanted. The songs, the artwork…everything. We couldn’t be happier with this record. 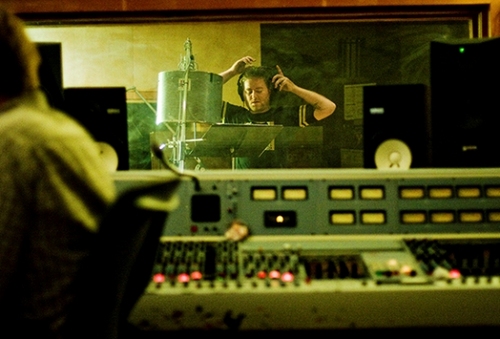