Punknews needs to work for the CIA because they always seem to know what our bands are up to. As purported by these illustrious demons (and we mean that affectionately); The Swingin’ Utters will release their next full length titled Here, Under Protest on April 26th! Tour dates can be found here! Check out what Johnny and Darius had to say about the release below. 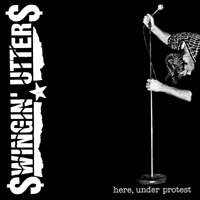 Johnny: Sorry it took so long for Swingin’ Utters to release “here, under protest.” The title was taken from a blooper of Orson Welles bizarrely stating, “Here, under protest, is Beef Burgers.” We have plans to tour for this album. In July, the legends Reverend Horton Heat are taking us on tour. We continue writing new songs so as the next release won’t take so long. Thank you for your patience.

Darius: We slaved over these 14 songs for over a year, kind of. There were a lot of technical issues in (and out) of the studio that contributed to the huge amount of time it’s taken to put this record out. I’m proud of the end result, though, and hope that people are as excited about a new release from a bunch of old men as I am. We’re hoping to be on the road again on our own tour in June, then a west coast tour with the Reverend Horton Heat in July, a little more headlining in August, Europe in September, and beyond that we hope to go to Japan again and maybe Australia for the first time (?)! Buy me a beer!